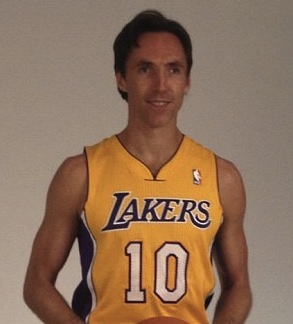 Welcome to Monday everyone. We’ve got a big week coming up and by the end of it, we should be officially up and running to the public, the private and everything in between.

Today we have stories from all over, including a report on the new law that Governor Jerry Brown passed in California allowing brewers to ferment beer in barrels that have previously been used to distill spirits. We also have a video introducing Steve Nash to Los Angeles, a link to a “Hungover Cookbook”, IKEA Beer, an article about Obama and his beer tastes and finally how to host a Clambake.

Barrel-aged beer is a great thing. It’s a straightforward process, you put beer in a barrel and you get beer out, but some government types were trying to qualify what came out of the barrels as “spirits”. Fools. Thankfully, Gov. Brown put a stop to that by passing a bill that states beer aged in barrels is still beer. Hooray for logic. Hooray for beer.

via Bless This Stuff

In the mornings that follow a night of heavy boozing, I treat myself to a three course meal. A bottle of gatorade. Followed by a second course of Advil and coffee. And I finish it all off with a big bowl of regret. This is the most that I can typically muster when I’m hungover. However, a new book has been published that will help you navigate those difficult times.

The second I get out of Ikea, there is one thing I need, and it’s not meatballs. It’s beer. Don’t get me wrong, I still get the meatballs. I always get meatballs. But now, at least in Britain IKEA is going to start selling it’s own IKEA Brand beer in it’s marketplaces. I wonder if it comes in balsa wood?

Welcome to Los Angeles Steve Nash! And in true Southern California fashion, our welcome party is a group of frat boys in an SUV drinking Keystone. The best part about this video? Nash looks as stoked as the guys giving him the beer.

Obama Drinks Bud Light, But Brews His Own Beer

Could Barack Obama be the first bi-partisan president? And by that I mean the two parties of cheap beer and craft beer. Who gives about real politics? Not this guy. Turns out Obama fancies the Joe Sixpack style of brew in public, while enjoying the finer points of homebrewed white house ale while at home. What I wouldn’t give to try the White House Honey Porter.

How to Host a Clambake

Want to have a clambake but only have one pot? Fear not. Bon Appetit is serving up a handy little guide to hosting a clambake with limited resources. Check it out.