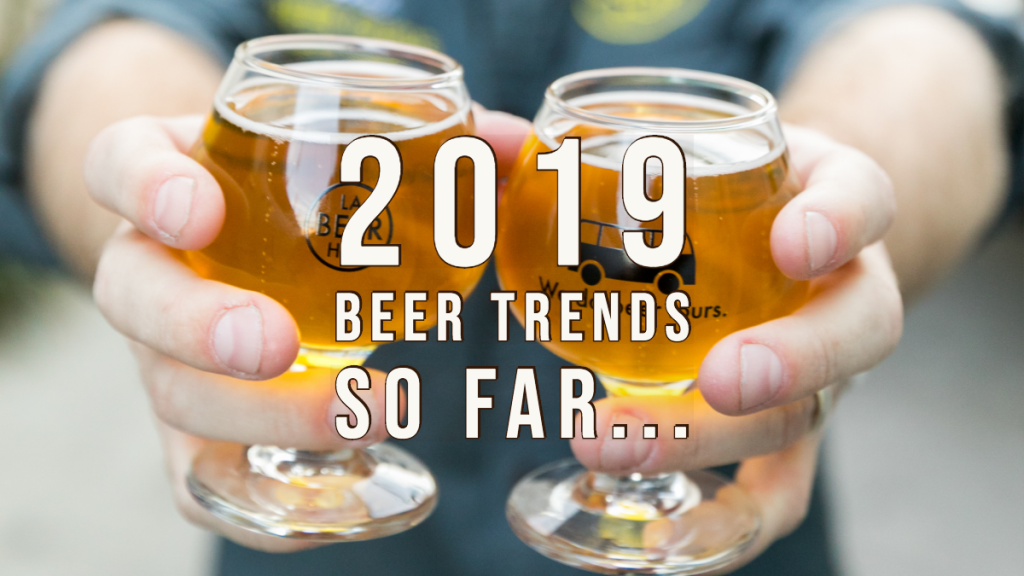 What is everyone drinking this year?

Craft beer has trends. Some come and go real quick (anyone seen any glitter beers lately?) and others stick around and create a lasting impact (the Hazy IPA is now everyone’s favorite beer style). Here are a few trends we’ve spotted so far this year:

They’re everywhere. Crushable, delicious, light lagers made with rice. I can think of 10 different Los Angeles breweries that have one on tap right now, and many of them are putting them out in package too. “Hayabusa” from Beachwood is available in 12 oz cans all over LA (I drank what could be considered “too many” of them at the annual LA Beer Week Battle of the Bands resulting in this photo).

Pronounced “Kwike”, this historic Norwegian yeast strain is the new hot ticket for brewers all over the city. It ferments quickly, it operates effectively at high temperatures, and it makes some awesome fruit flavors. LA Aleworks has used it, Eagle Rock Brewery did a collab with El Segundo and used it. Three Weavers did too. Wanna get geeky? Read this article: Kveik, The hottest new centuries-old beer yeast you’ve never heard of.

The rocket-rise of Hazy IPAs taught brewers two things. 1. Never fall behind on a trend. 2. People like unfiltered beers. So, many brewers, for better and for worse, have been leaving their beers unfiltered all over the city. So, next time you get a pilsner poured for you and it has some haze to it, it’s up to you to decide if that’s a creative choice or if the brewer is simply being lazy.

It may not be a full “trend” but a couple of beermakers around the city are creating beautiful, complex beers that clock in at < 4.0% ABV. Two breweries – Ambitious Ales in Long Beach, and Cellador in Van Nuys make some of these truly sessionable beers that, for their lack of alcohol, don’t miss anything in the flavor, complexity, or mouthfeel. This isn’t new, per se, Eagle Rock Brewery built LA Beer with a 3.8% English Mild called “Solidarity”, but, I’m excited to see a few local brewers continuing the craft of all-day-drinkers. Also, don’t knock it, you’ll still get a lovely buzz off a 3.8% beer. The Spanish refer to that type of buzz as “La Chispa” (The Spark).

The Return of West Coast IPA

The West Coast IPA style of beer is arguably the mother of the craft beer boom, but in the last few years production on that style has quieted down with the rise of things like Session IPA and Hazy IPA eating up market share. But, this year, we’ve seen a resurgence with beers like “LA OG IPA” from Smog City Brewing, “Now Again” from Mumford, and “West Coast IPA is Dead” from Green Cheek. They’re not quite as bitter as they were back in 2012, but, they’re not hazy and they pack a delicious hop punch 🥊.

Give me a million dollars to bet, and I wouldn’t have put even a single dollar on any LA brewery creating a hard seltzer. But here I am, without a million dollars, and there are multiple LA breweries including Beachwood Brewing who have done just that. They’re fizzy, they’re fruity, and they’re CLEAR. Fermented just from sugar, they’re technically gluten free, light-bodied and easy to drink. But are they good? You gotta try one yourself.

Look out next week for our update on new breweries that have opened so far this year.